I’M BACK! I exceeded my own expectations by making not 5, but SIX blog posts before getting bored and leaving it for a few months 😂 Let’s drink to a second time lucky and being far more consistent. Mine’s a G&T.

My girls love to spin! Preferably with socks on, on laminate flooring…whoosh. Of course the most important ingredient to successful spinning is the dress. My girls have had a couple of GORGEOUS Spin Dresses from Polarn O Pyret but at £30 a pop they are not cheap. 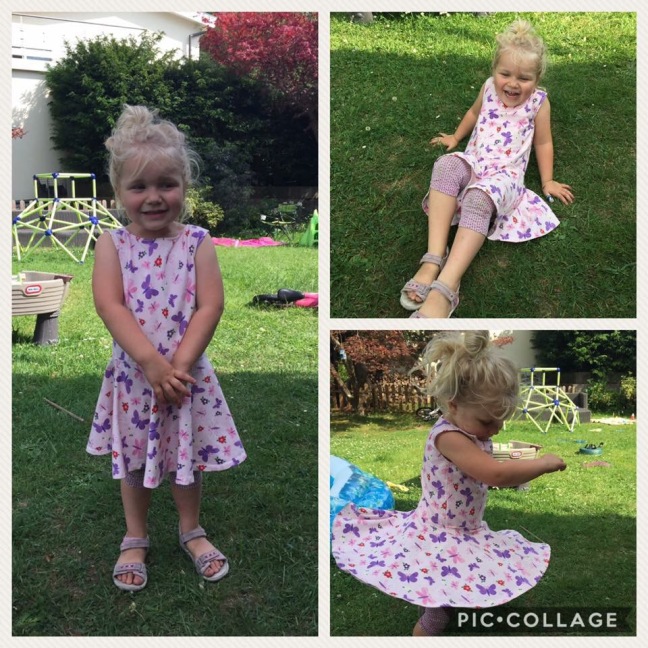 So I went to the fabric shop, I made by own bodice by copying an existing one, I watched a You Tube tutorial to make the full circle skirt, and the rest is history! I could JUST squeeze two dresses out of 2m of fabric for my then 5 & 3 year olds.

My girls were soon set for summer with several new Spin Dresses each and they’ve barely worn anything else since. Friends and cousin’s are also now proud owners of their own dresses, and I would thoroughly recommend making these if you have any small people in your lives who like to spin ❤️

I did it, I survived another round of cake decorating. I burnt the midnight oil but it was worth it.
First off, the least successful of the two cakes was Oscar’s pirate ship. I used a silicone mould for a banana and sultana cake which in itself was actually rather successful, it was far more defined than I had expected so I was initially pretty chuffed. But then it turned out that trying to used dxfondant icing on a pre-formed shape was a nightmare! Royal icing would have been better but I had none so that was the end of that story. Here is the disaster itself; 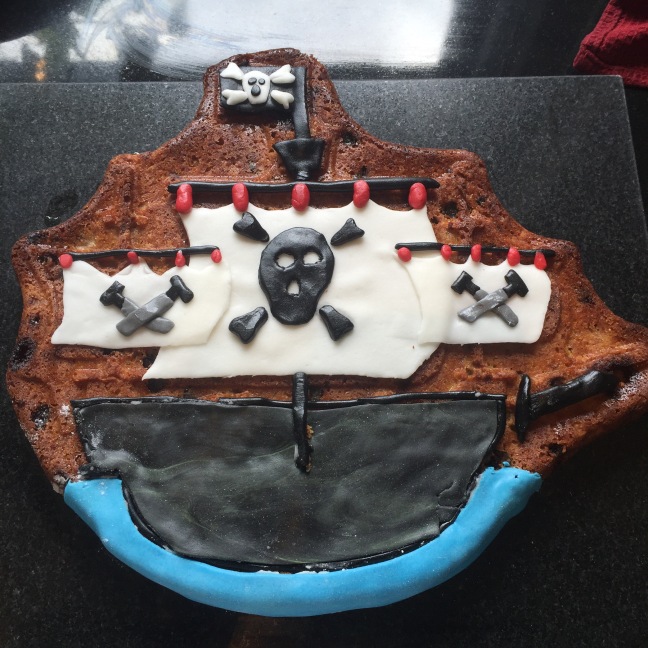 None the less it tasted good and Oscar enjoyed it.

Note to self: don’t bother with moulds, free-handing it is WAY better.

The visual success of the two cakes was the “strawberries and rabbits, please Mummy” cake which, although far from perfect, I was pretty chuffed with.
It was Victoria sponge coloured red, orange, green and blue, with butter icing in the middle and fondant decoration. It was yummy!
But I’m not just going to show you that, oh no! I’m going to build the tension by showing you the last few birthday cakes for my eldest starting with her 3rd birthday which was the first time I had used fondant icing. 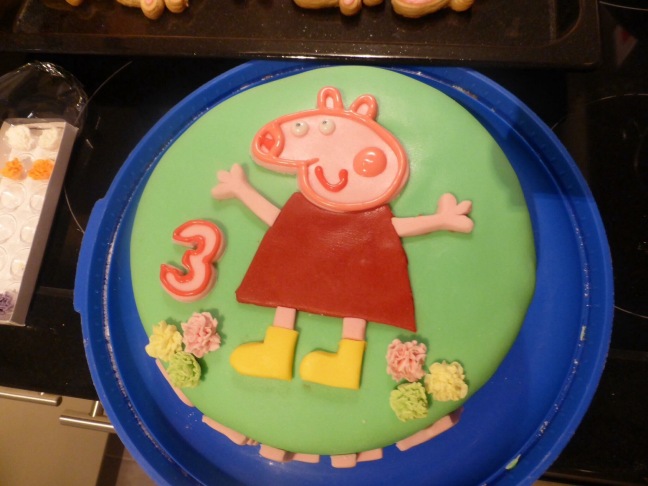 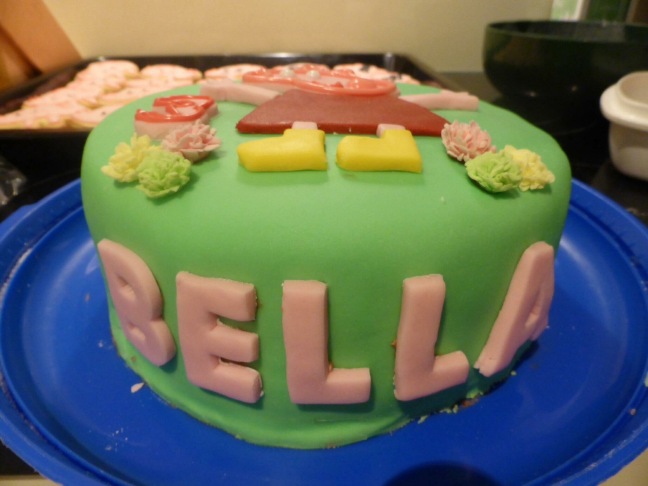 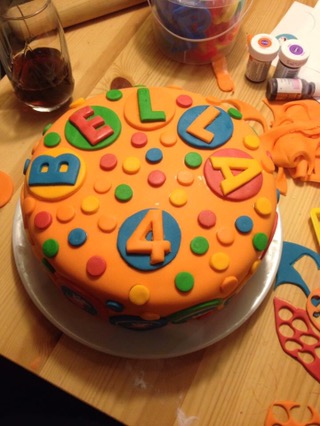 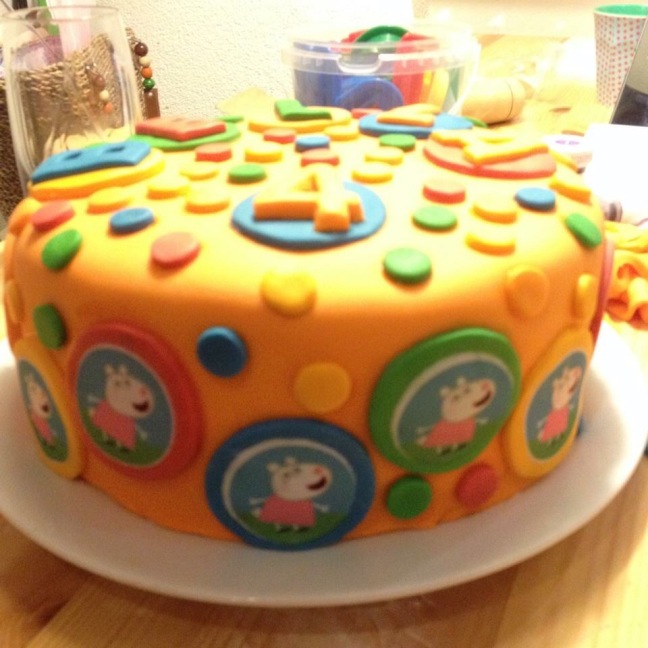 And now here is this year’s cake, “strawberries and rabbits, please Mummy”; 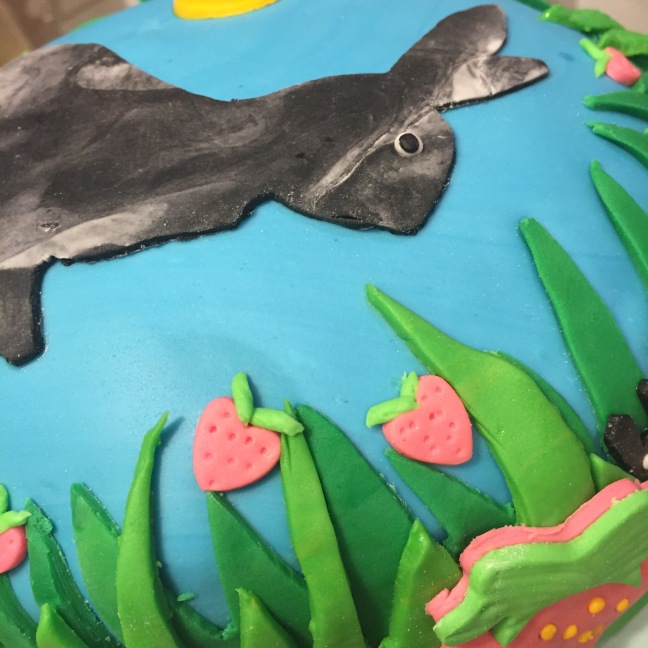 My big-little Rainbow Dash loved it, and that is the important thing ❤️

It’s 7am and I’ve been up for two hours already thanks to my youngest, Oscar. I’m fueling up now with a cup of tea because today I will mostly be getting my bake on. Eldest, Bella, and youngest, Oscar will be celebrating their 5th and 1st birthdays respectively tomorrow. Birthdays mean cakes!

I’ve been briefed by Bella that she would like a strawberry and rabbit cake. Oscar has no choice about his pirate cake because I scooped up a silicone tin for a bargain a few months ago.

I really enjoy making cakes, and have a love/hate relationship that comes with slaving away in a hot kitchen until midnight the night before the party trying to get things just right.

I am mediocre at cake decoration – they look great from a distance until you get up close then they look decidedly ropey but thankfully they’re often gobbled up before anyone has the chance to judge! However I do not have a good feeling about today’s cakes, I feel a certain sense of doom that I think is because I’ve not used a silicone tin before.

So I thought I’d give myself a boost by posting about Middle Child, Jemima’s, birthday cakes – she was 3 in June.

So first off I had to make cakes for our German lessons and made use of some edible Suzy Sheep stick on things which I had left over from lasts years cake. I love the plain white understated decoration And then BOOM! Rainbow cake! 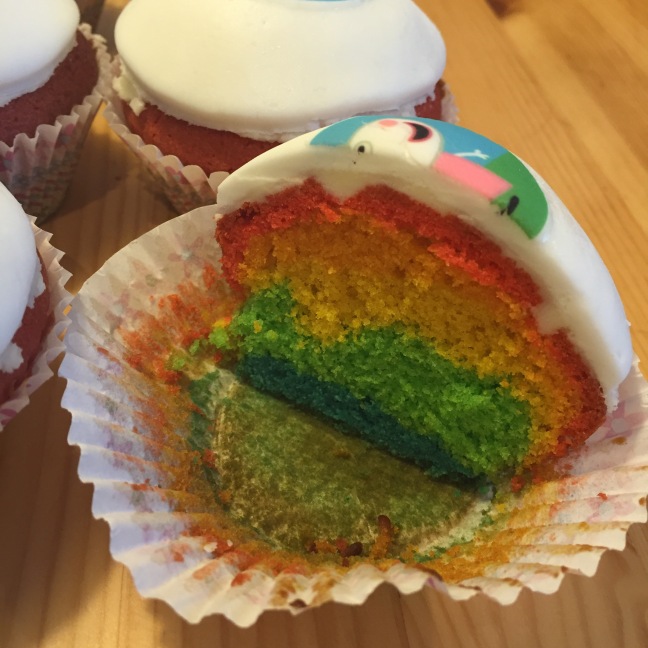 Then next came cakes for krippe (nursery/daycare) and I went with gorgeous contrasting yellow and blue, and more rainbows on the inside, though I don’t seem to have a picture of that.

And the pièce de résistance for my Winne The Pooh OBSESSED three year old was, of course, a rainbow Winnie The Pooh cake. 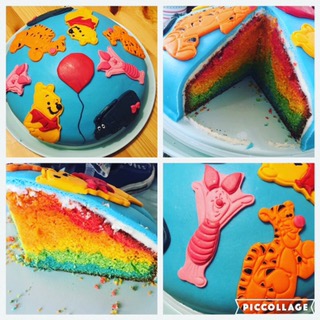 So by now, as you can imagine, I was freaking caked and rainbow-ed OUT. So my HILARIOUS husband decides to ask for a Rainbow Pinãta Frozen cake for his birthday just a couple of days later. Not one to loose face I gave him exactly what he asked for, although with cosiderable less effort! 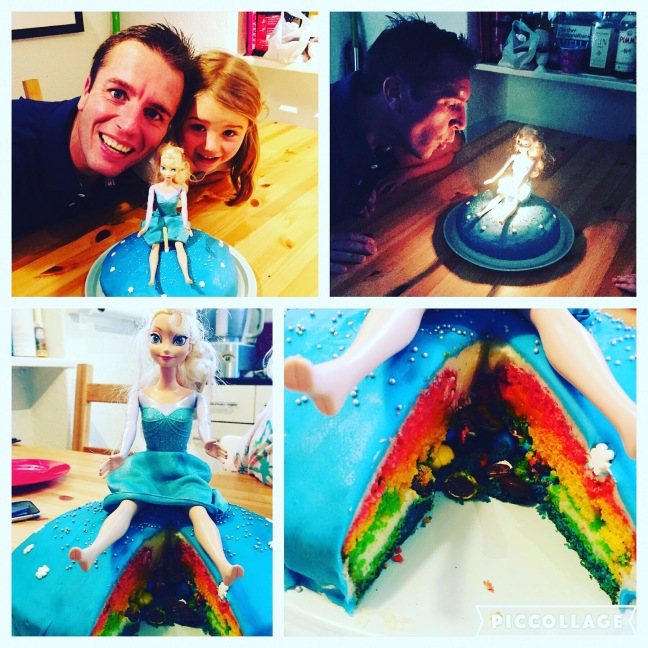 Obviously these pics have all been Instagramed the hell out of. I ❤️ Instagram.

So now I’m ready for the day and I’m feeling a bit more positive about today’s cakey adventures. I’ll report back tomorrow!

Next obsession – drawstring bags! My eldest starts Kindergarten in August and she needs a drawstring bag to keep her gym kit in and I really fancied making it myself.

I did a fair amount of research into tutorials and Shabby Fabric’s (ooh, my first link!) YouTube video was my final selection. I wanted something that was lined and looked pretty polished and this fit the bill.

I went a bit drawstring-bag-crazy and made 5, and have another two on the go but have run out of cord – I hate it when that happens.

I settled on my measurements (not following the measurements in the Shabby Fabic tutorial) for a smaller bag which would be suitable for 2-4 year olds, and a larger one for 4+.

I adore this Beatrix Potter print, just how adorable is this?! 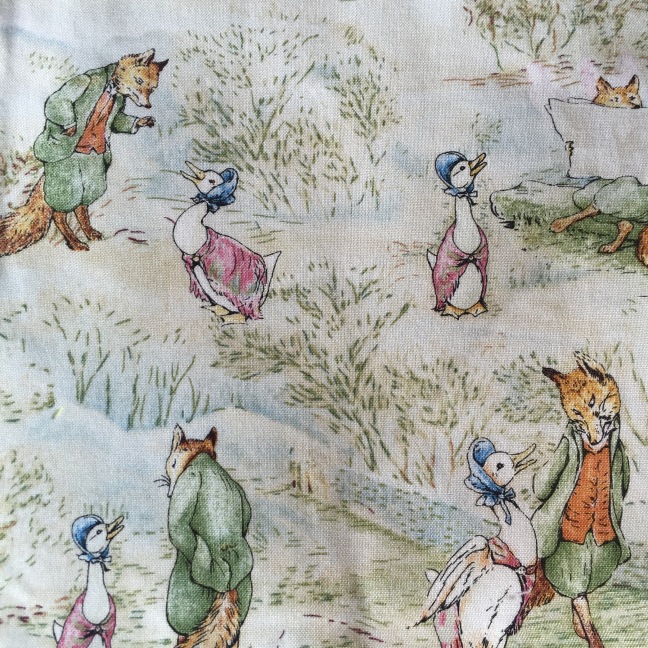 However my favorites are the two that I hand dyed years ago with a great friend who is the beauty behind Gugus Baby. We had such a blast experimenting with dyes and I have saved some of the fabric all this time and finally had the perfect project for it.

I can’t get enough of all those subtle and not so subtle variations in colour and random patterns. I really must do some more dying, it was such good fun.

I’d like to gift some of these bags to my daughter’s buddies who are also starting kindergarten this year, however I just know they are going to pick any bag except my hand dyed ones – come on, lions are way more interesting and fun right?! 😢 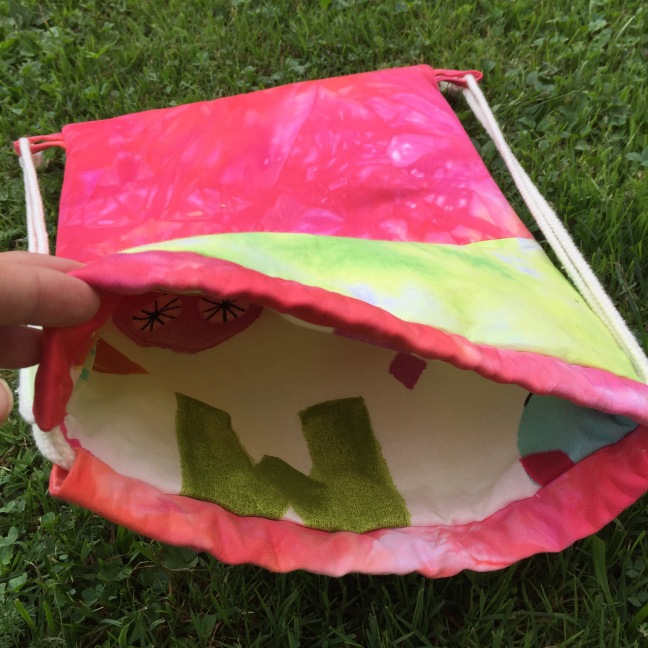 Finally, here is 3 year old Middle Child/Cinderella/Elsa/other Blue Princesses ARE available (😂) modeling the Jemima Puddleduck bag which is the larger size and arguably the smaller would be a better fit, but she loves it.

My eldest daughter turns 5 next week and ever since she was born I’ve been mad about sewing baby and kids stuff. Two weeks or so ago I’ve no idea what came over me but I had a ‘moment’ and suddenly I wanted to make something for me….ME!

I took my Amy Butler bag book from the shelf which was a gift from Mother In Law a few years ago and had a look. The blurb says that the book begins with the easiest bag and slowly works its way through tutorials for 12 bags with the last being the hardest to sew. Not only was the first bag, the  Cosmo Bag, easiest to sew, it is also my personal favorite in the whole book. The book, by the way, is WONDERFUL because it includes the pattern pieces in full size – heaven!

So I set off on my first ever bag making experience. Hours were spent tracking down gorgeous fabric and affordable interfacing (never used it before!), and 2 weeks and many, MANY hours later I had the finished product. I ADORE it! 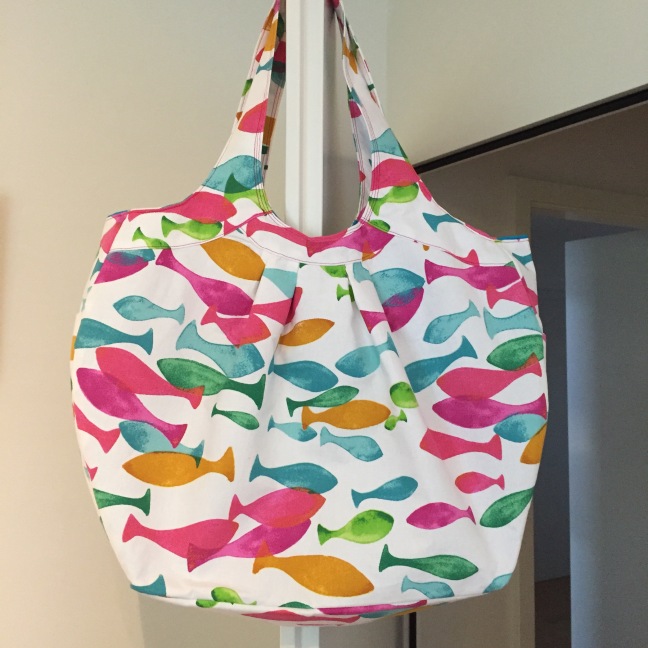 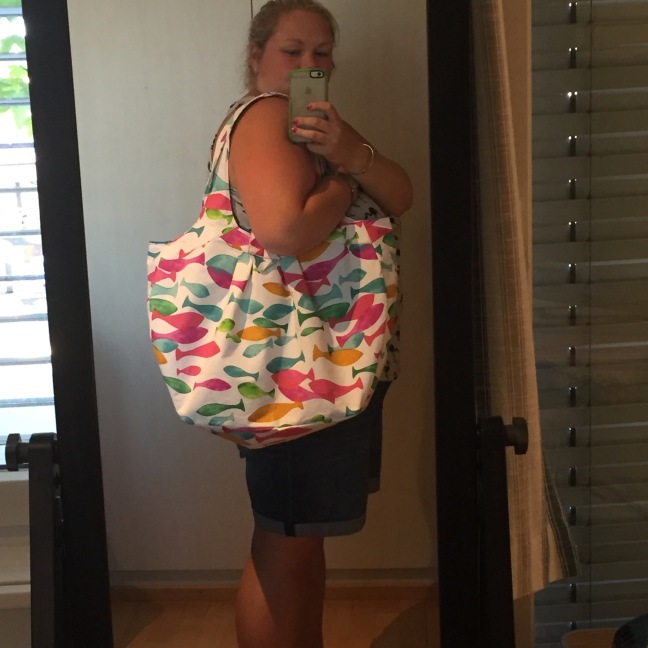 Yes, I know the photos are pretty bad, by I’m new to all this so give me a break ok? Also I just took them to show my mum, I hadn’t even dreamed up this whole blog idea at the time 😂

The challenge I have given myself now is to make all the bags in the book (ok, I might veto 1 or 2 that just aren’t my kind of thing). Not that I’ve given myself any kind of time frame, no need for that kind of pressure and there’s so many other things I want to do along side the bags. And I need more interfacing….

So this week’s obsession is Fimo! I stumbled upon xoxRufus on YouTube (I’ve no idea how to link yet) and binge watched a tonne of her videos. How cute are her cupcakes?

Suddenly, and unsurprisingly, I wanted to have a go. My daughter is finishing krippe (nursery) soon to start Kindergarten in August so I’ve been trying to think of something she can make for her teachers as parting gifts. Fimo is clearly the answer.

My daughter’s comforter is her Jellycat bunny ‘Jingle’, so having picked up some Fimo in appropriate colours we decided a keychain or similar with a mini Jingle on it would be a sweet reminder. Here are my daughter’s attempts;

I think she did a great job!

Obviously I wanted a go to, and came up with this little cutie; 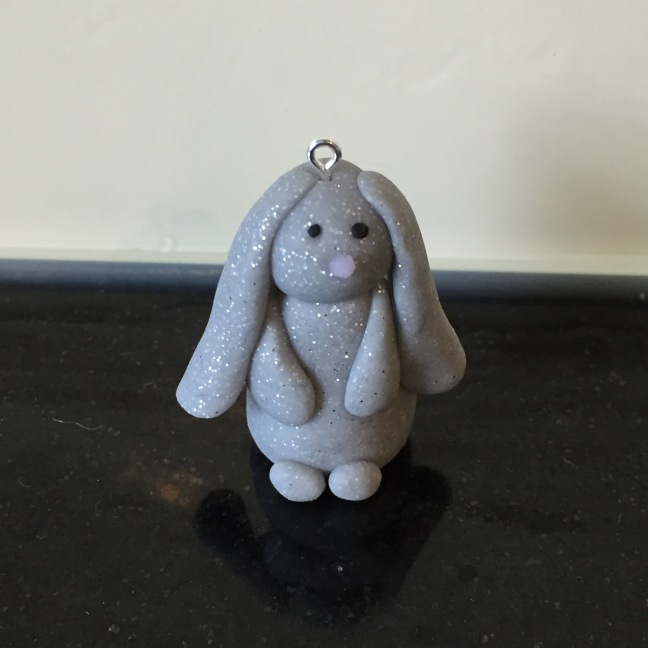 I love her! Lots of fingerprints etc when you look closely and far from perfect but I’m happy with the overall look of little Jingle.

I had so much fun I spent the evening making two more, one holding a heart and one holding and even minier Jingle. Freaking adorable. However they are unfortunately already lost (my bet is under the sofa) so there is no pic.

Now I’m imagining making my own little series of Fimo charms or key chains and opening an etsy shop and doing a roaring trade….oh how good it is to dream!
Update: found the other two….so cute!

So, I have decided to have a go at this blogging lark. I have one of those addictive personalities where if someone is super excited about something, more often than not their excitement rubs off on me and I get super excited about the same thing. This is especially true of almost all things crafty.

I absolutely love crafting and have been sewing for some time now. But there are so many crafts out there! How do you fit them all in to your life?! My solution to this problem is to do a little bit of everything, gently guided by friends or You Tube or blogs or magazines or anywhere else I might see something I like and catch the ‘bug’. I’ll often become a little obsessed and do something over and over until I reach the point I’ve suddenly had enough and don’t touch the project again for three years 😂
I was a child of the 90s. Do you remember recording that song you LOVED from the radio onto your cassette tape and becoming obsessed with it, playing it again and again and AGAIN until out of the blue 5 days later you can no longer bare to hear the song one more time? Yep? That’s me.

So I’ve decided to start a blog as a record of all my crafty adventures henceforth. I’m a mum of three young children so I imagine they will also make an appearance every so often too. They also love crafting but I don’t mind admitting that crafting with kids can be more than a little frustrating 😬

So here we are, my first blog is written and I’m looking forward to my first ‘proper’ crafty blog entry which I’d like to think will be coming soon. I also like to think that blogging is a creative hobby I can keep up for more than the standard 5 days, but only time will tell.